Our own Chef Wade spent some time working for one of the biggest and most famous teams in motorsports. As we near the 101st running of the Indianapolis 500 later this month, we sat down with Chef Wade to talk about his time in IndyCar.

Q: Tell us what you were doing in IndyCar.

Chef Wade: I cooked for Paul Newman and Newman-Haas Racing in the 1999-2000 seasons. The racers were Mario's son, Michael Andretti, and Christian Fittipaldi. I made sure the families, crew, VIP’s, and guests were taken care of, as well as the large events we would have.

I got the job because I worked with their Executive Chef at Trattoria Carmine in Seattle, who worked there part-time when the season was over. He asked me to come cook with him on the circuit. He was a very intense Austrian Chef!

Q: Wow, Paul Newman! Did you use his salad dressing?!

Chef Wade: Yes, actually we did use a few of his products. Dressings and lemonade.

Q: Did you meet any famous drivers or personalities?

Chef Wade: Yes, because we were in the pits and had access. It seemed like we could go anywhere we wanted. I met Michael and Mario, of course. Paul Newman, Paul Tracy, Christian Fittipaldi, and other actors, musicians, and models like Ashley Judd.

Q: What types of foods did they like to eat? How were their standards?

Chef Wade: Just good, simple food that was prepared and presented well. We would do sushi and more exotic things if we had a dinner party or event. We were mostly responsible for breakfast and lunch. The drivers and families would go out or eat at their hotels for dinner. We were already working long hours, about 15-18 a day, so I was glad to leave the track when I was done.

Q: What's your favorite track on the series?

Chef Wade: Vancouver, BC. There is something about racing through a city that I always thought was REALLY cool! Nice people up there as well.

Q: Tell us a little bit about Indianapolis. Is it really as cool as everyone makes it out to be?

Chef Wade: A lot of history. You can feel the energy there. You feel the energy at other races, but it is amplified there. I did not get to see everything as much as I wanted to.

Q: What's the largest number of people you cooked for?

Q: Did you use a mobile kitchen of sorts? What kind of challenges did this present, and how do those challenges relate to a more traditional kitchen?

Chef Wade: We had commercial equipment trailers that were transported to each track on the tour. Small and HOT. This made cooking and prepping a challenge.

When we arrived days before the race, I would personally go through all of the equipment to make sure all was good. Sometimes each of the kitchens and storage areas would be spread out in the Pits. We would then have a golf cart and race back and forth.

One day I was in the golf cart and someone was just laying on their horn behind me. I was like, “Who is this jerk?” I turned around all fired up, and it was Paul (Newman) smiling!

Q: Are there any pieces of equipment that you found overly useful in your situation?

Chef Wade: Refrigeration!!!!! A close second was the Kegerator!!! Just kidding! (No, not really.)
What happens in Vegas, stays in Vegas!!

Q: Tell us about your most memorable experience.

Chef Wade: We were in Fontana, and I was prepping in one of the kitchens. I had lifted something wrong and screwed my back up. You know when you feel pain, and it hurts so bad you sweat? That was me.

I had the door open and people are walking by all day. I noticed this guy stopped and was looking at me. I looked at him and said, “Can I help you?” Probably pretty direct and rude. He said, “What did you do to your back?”

I told him nothing, thinking that was weird. He then said, “I am Michael's (Andretti) chiropractor, and I can help you.”

I thought I was getting pranked or something by the guys, so I went along. “Yeah, sure.” He said to follow him. He headed for the family's personal RV. I told him, “I don’t think I’m supposed to go in there.” He said don’t worry about it.

This RV was AWESOME!! Top of the line! I mostly remember marble and gold. There was an adjustment table and a few cracks and twists, and I was as good as new!! Couldn’t believe it!! I said sorry I was a jerk before and thanks. I asked how he knew my back hurt. He said, “I could tell by the way you were standing.”

During the same trip in Fontana, I was racing around the Pits with another chef who also does PGA tournaments. We would prank each other and make stupid bets. So this guy passes us, and I told him, “Dude, that was Vince Neil who just walked by!”

I was trying to get him to bet me. He said, “fifty bucks?”

“Like this!!” I turned around and yelled, “Shout at the Devil!!”

Vince turns around with a big old smile and gives us the “Rock Out” hands. I looked at my buddy and laughed, who had a hundred dollar bill for me. He said, “That was a pretty cheap one Wade!!”

I said, ”Yeah about a hundred bucks!!”

Want to hear more of Chef Wade's IndyCar stories? Spend some time with him, talk racing, and learn more about the foodservice equipment solutions that can help you. 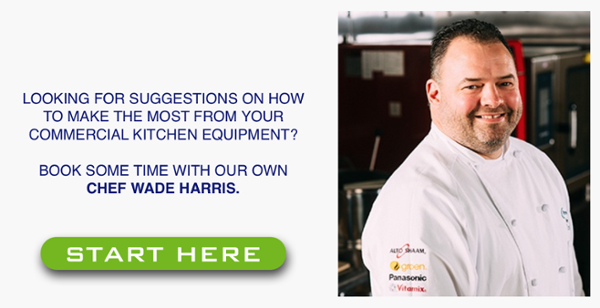